Commercial ships trade across the oceans to load or unload cargoes in the ports of various countries. No two countries are identical in their regulatory systems, let alone regulating ships. Thus, a set of internationally recognised and agreed regulations/standards is needed for the sake of consistence.

The International Maritime Organisation (IMO) is a United Nations (UN) specialised agency administering the international maritime regulations and promoting cooperation between countries. There are various conventions focusing on different aspects of regulating the maritime industry such as safety, pollution, training and certification of seafarers.

Also, the International Labour Organisation (ILO), which is another UN agency, has input to the condition of work and employment for seafarers, namely the Maritime Labour Convention. 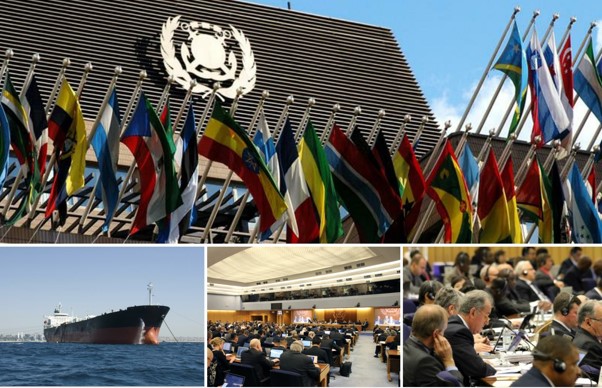 Any country, not necessarily having sea coast, can join the IMO. IMO has 174 Member States and three Associate Members as at January 2020. Hong Kong and Macau are two of the three associate members since they are not sovereign states.

Non-governmental organisations, such as Green Peace, may apply to be an observer and apply for consultative status.

IMO also enters into agreement with some inter-governmental organisations, such as The International Criminal Police Organisation (INTERPOL) for exchange of information.

IMO has a number of conventions (agreements). Each convention focuses on one aspect of shipping rule such as safety, pollution, seafarer qualification…

A member then may ratify any convention. However, no member is obliged to ratify a convention. It depends on the member’s readiness and political will of its government and parliament. When a member ratifies a convention, the convention virtually has become part of the law of the member country.

What is the meaning of ratifying a convention?

The Member State can then legitimately enforce the standard, in respect to that particular convention, on any foreign ship while in its port with exceptions such as a ship looking for refuge.

The Member State has to establish procedures to ensure ships flying its flag comply with the relevant standard by periodical survey, certification and inspection. The Member State will take action when discrepancies are reported either by an agent appointed by the Member State to execute the procedure or by another government whose port the ship visited. This act is called Flag State Control (FSC).

The convention standard is the minimum. Individual Member State may yet impose a higher standard on its ships.

During a PSC, the port State enforces the convention standard only regardless the ship is at a higher standard as the shipowner initiative or the ship’s flag State requirement.

What happens to a ship flying the flag of a country has not ratified a particular convention?

A country who is a member of the IMO is not obliged to ratify every convention. The member may not be ready in terms of infrastructure or its political environment is not favourable to ratify.

The spreadsheet abstract below shows the status of conventions ratified by some IMO members. In particular, Hong Kong is a quite active member, though as an associate member only, compared with some other member, say Uzbekistan who has no sea coast. 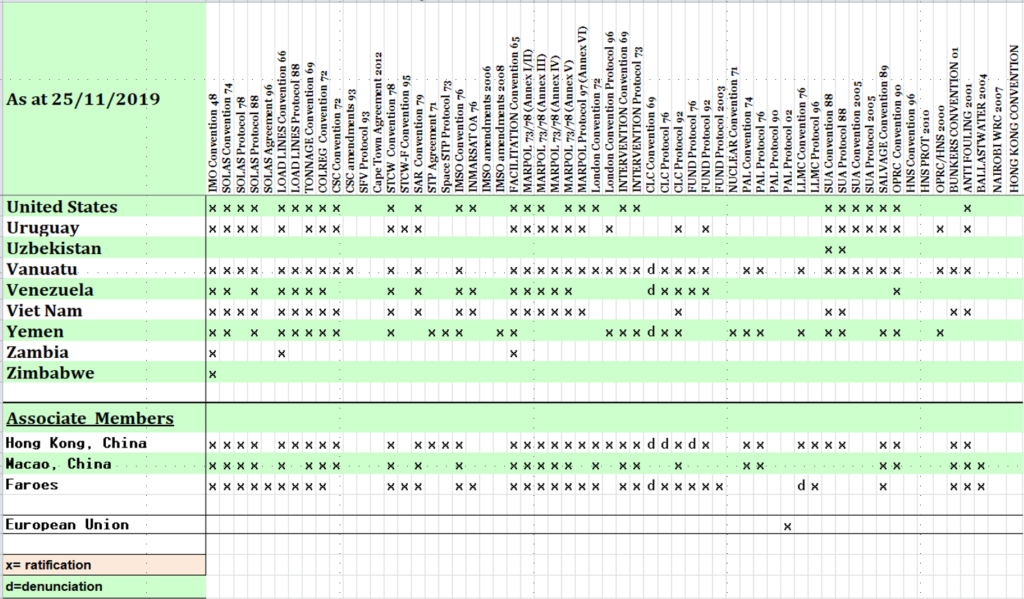 The act of applying the convention standard by a ship from a non-member state is termed “no more favourable treatment”. Everyone is equal.

While the ship is not necessarily equipped to meet the convention standard, the shipowner has to equip the ship to meet the standard voluntarily if the ship is going to trade in a port of a member state.

The convention standard is upheld in this way even the ship’s country has not ratified the convention.

The Structure of IMO

The committees continuously review, update and upgrade different conventions and technical codes in line with change in technology, response to incidents and input from different organisations.

Member state may also request the committee(s) to review a convention based on the member’s experience. For instance, in 1989 a fast speed ship Apollo Jet lost control at full speed then turned into the Yaumatei Typhoon Shelter in Hong Kong. The ship ran down two other ships. Four persons died in this incident. Hong Kong administration later requested IMO to review the Dynamically Supported Craft (DSC) Code for a standard on the design and construction of fast speed craft like the Apollo Jet in view of the finding of the incident investigation. The request was accepted. Sub-committee was set up to look into the matter. Hong Kong together with other members interested in this subject worked together. Finally, the DSC Code was totally rewritten, thus replaced by a new code named High Speed Craft (HSC) Code. This code is now an international standard. In particular, it is the standard on the many jetfoils, catamarans, hovercrafts, hydrofoils carrying hundreds of thousand passengers between Hong Kong, Macau and Mainland China.

The process is long. A proposal is first accepted and approved as a work programme. The relevant technical committee assigned a sub-committee to liaise various members to examine, discuss and draft. The finalised/agreed draft is submitted for approval. The level at which the approval is sought depends on the draft. A circular aiming to elaborate or an amendment on existing content may not need high level approval. A new convention may need to be approved by the Assembly.

A new convention still needs ratification from majority member states to be in force. Some conventions have been in the process for thirty years or more and are still not yet in force.

Once a convention is in force, the subsequent amendment or addition of codes to detail will require less effort.

IMO is a United Nations agency specialised in maritime affairs.

Any country can join IMO.

Member of the IMO is free to join any convention through ratification.

Nevertheless, member is not obliged to ratify any convention.

Member of a convention has the duty to ensure its ships comply with the convention requirements.

Member of a convention can enforce ships, from another member or non-member, visiting its port to be in compliance with the convention requirements. The member may take necessary action on the ship to rectify any discrepancy found.

IMO continuously update and upgrade conventions, codes associated with a convention. A new convention for a new aspect may be created when deemed necessary.

IMO as a United Nations agency coordinates countries to work together for safe ships and clean seas.

We shall explore more on some major conventions.