4th Episode -
Controlling Pollution of the Sea by Oil

You cook at home, sometimes deep fry. Invariably there is used/unwanted cooking oil left, perhaps in litres. How do you dispose it? Pour it into the drain, it disappears. Mix it with a lot of detergent (a kind of chemical) to re-condition it (the product is a form of chemical) to become apparently not oil. Take it to a waste management facility and pay the facility to treat it.

A ship has waste oil from these main sources:

Only ships carrying oil cargo have waste oil type (1). When the waste oil has accumulated to a certain amount, it is discharged to the shore reception facility to prevent polluting the sea. Whilst the “water” component may be discharged to the sea subject to very strict and complicated conditions which I am not going to elaborate here.

Every ship has an engine room with waste oil type (2) and type (3) to handle.

Waste oil type (2) is mainly oil which is a serious pollutant. International rule prohibits its discharge to the sea. Special piping arrangement is required to prevent direct discharge to the sea. The waste oil is either incinerated on board or disposed to the shore-based reception facility.

Waste oil type (3) is virtually water contaminated/emulsified with small amount of oil. Yet, it still imposes a threat of pollution to the sea environment if disposed directly to the sea. However, it may not be economical to dispose it to the shore-based reception facility which could be costly in most places of the world.

How about removing the oil from the oily bilge water to a level allowed by the international standard for discharge to the sea? The oil so removed is collected and disposed as if waste oil type (2) while the “clean” water is discharged to the sea under controlled conditions set by the international rule. Looks like a good idea.

First, take advantage of these physical properties of oil in water:

The properties can be easily observed in daily life.

Oily bilge water collected in the bilge wells from various sources is transferred to a bilge water holding tank. Oily bilge water is left to settle in the tank. On settling, oil floats to the surface and accumulates over time. The accumulated oil is then removed for disposal as if waste oil type (2).

The major “water” component of the bilge water tank content will then be processed dynamically for discharge to the sea as detailed below.

It is a dynamic process to separate oil and collect it for proper disposal. The oily water flow should not be turbulent and should be as laminar as practicable to avoid emulsification. A reciprocating pump is commonly used to avoid a turbulent flow.

In order to optimise oil removal, the flow rate should be low to allow time for separation. Typical maximum flow rate of an OWS is 2 m3/h.

Below is the schematic diagram of a typical OWS: 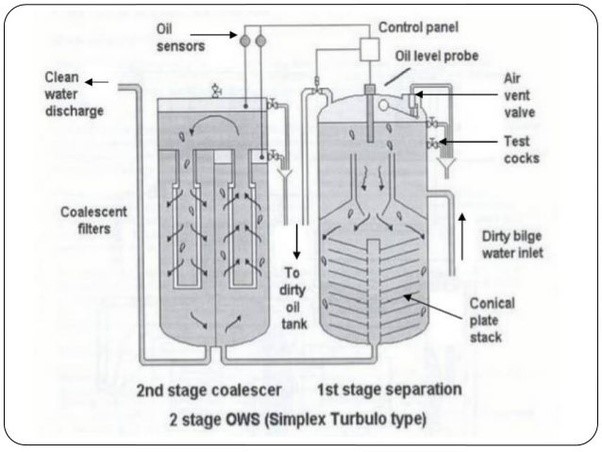 Oily (dirty) bilge water is extracted from the bottom part of the bilge water holding tank, where oil content is less, to go through the OWS. The OWS is designed to handle water emulsified with oil i.e. low oil concentration.

In the above diagram, water flow is indicated by black flow arrows whereas oil globe flow appears as droplet going up.

Oily bilge water is pumped into the first stage chamber circumferentially i.e. directed along the wall of the cylindrical chamber instead of pointing towards its centre. This will help to create a laminar flow along the wall and allow some of the oil to adhere to the hard surface. If there is any oil adhering to the wall, the oil size grows with the oncoming flow. Eventually, the oil grows big in size to gain sufficient buoyancy force to leave the wall and floats to the chamber top for collection.

Oily bilge water then flows from a high position at the centre of the chamber downwards to the lower chamber. The lower chamber is fitted with a number of conical plates. Water flows from the outer circumference towards the centre sloping downward through the narrow passage between the plates. The narrow passage helps to create a laminar flow. The “large” number of plates provides a lot of contact area between the water and the hard surface of the plate. Water flow speed is low when entering the plate stack from the circumference to increase time of contact, thus optimising oil separation.

While flowing between the plates, oil component in the “water” drifts up and adheres to the bottom of the plate above to form an oil globe. The oil globe captures more oil from the passing “water”, thus it grows. Then buoyancy increases that the globe moves upwards along the conical plate. It may join with other oil globes. The globe grows bigger and drifts further upward along the plate bottom. When the oil globe is large enough with sufficient buoyancy, it leaves the plate stack and navigates upwards against the water flow to and is collected at the top part of the chamber along with many others.

There is an oil level probe fitted at the top of the chamber to measure the level i.e. the amount, of the collected oil. When the level has reached the set point, a controller opens a valve allowing the water pressure inside the chamber to push/discharge the oil collected to a waste oil tank for disposal as if waste oil type (2). The controller closes the discharge valve when the oil level has come down below the set point.

The process after this stage should further reduce the oil component in the “water” to the allowable level for discharge to the sea under the international convention on marine pollution, Marpol.

The “water” then flows into the second stage. In this stage, coalescers are used to improve the efficiency of oil removal. The coalescer may be viewed as a fine filter but is made of a material able to capture oil. Water flows from the outside periphery of the first coalescer towards the core radially in order to maximise the initial contact area and to increase the contact time by lowering the flow speed.

In the coalescent filtration process, captured oil again form globes and grow. When the globes have grown large to gain enough buoyancy, they break the adhesion and float to the oil collection part of the chamber for later discharge to the waste oil collection tank for disposal.

Finally, the treated water is discharged to the sea subject to Marpol requirements.

There are other ways to treat oily bilge water for disposal to sea. The method mentioned above is simple and economical utilising the physical properties of oil in water. No chemical is used.

The above is a very glance of the effort by the ship to prevent/control oil pollution to protect the marine environment.

Below is a typical shipboard OWS: 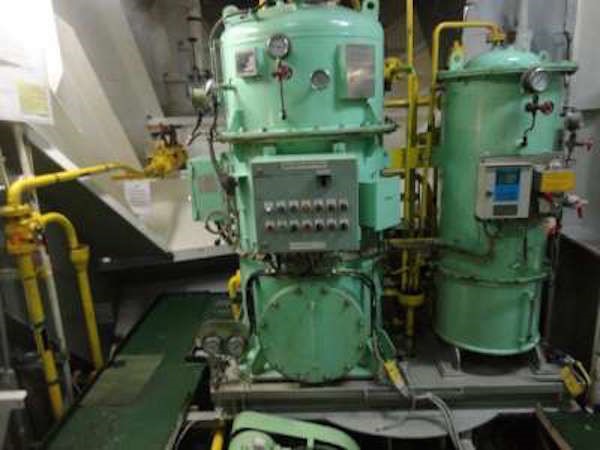 An article titled "What is pi?" on how to find the value of pi has been added under the "Maths" tab in the "Sharing" page of this website.