I am going to write a personal known of/experienced tragic story about seafarer’s life.

Below is a print screen of Google Map of the Persian Gulf (PG). Reader may google to see the exact places later mentioned in this article. 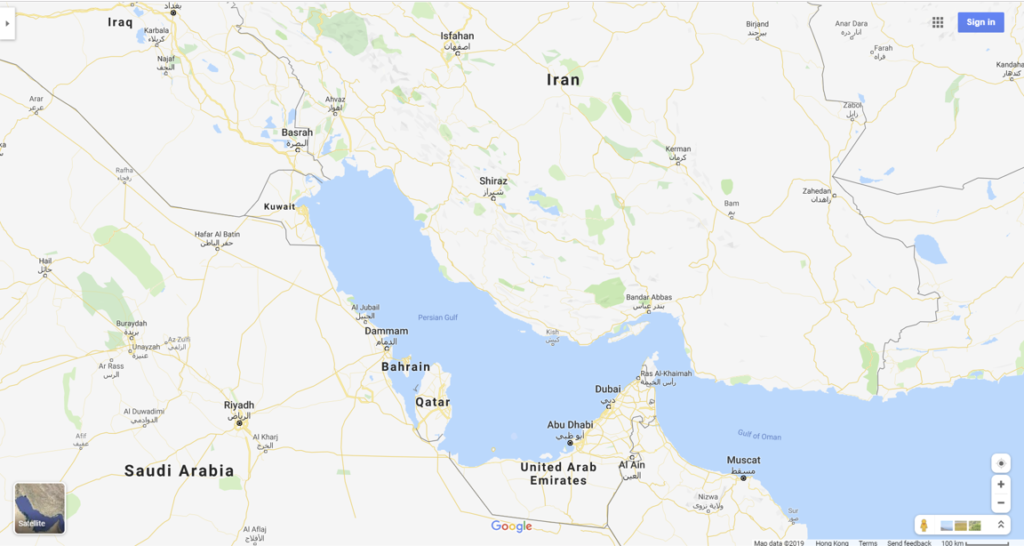 In the early 1980s, Iran and Iraq were at war. This was only a regional conflict that the world community did not pay much attention.

In order to purchase necessities for life and the war, both countries sold crude oil, in many cases at a discount to attract customers. Both Iranian crude and Iraqi crude were of good quality. Good quality commodity at discount rate attracted buyers and ships were chartered to take the commodity. Since it was not declared as a war zone, the restrictions were minimal.

There were reports of attacks from these rival countries on ships of trade to deter trade, i.e. lifeline, of the other side.

In 1984, one of my company VLCC (Very Large Crude Carrier – a crude oil tanker is classified as a VLCC when its carrying capacity is not less than 200,000 tonnes deadweight whereas 1 tonne deadweight is approximately 7 barrels ), named World Knight, was chartered to take crude oil cargo from a terminal at Kharg Island on the Iran side.

While approaching the terminal early in the morning, a warplane (I could not tell from which country though believed from Iraq) appeared in the horizon and fired a missile to the ship.

The four persons in the engine room at that time had never been seen again, assumed dead. The fire spread to the living quarter directly above the engine room.  Seven more persons lost their lives bringing the death toll to 11 persons.

Once I worked with the chief engineer, Vosa, varnished in the engine room. Vosa was a very hardworking engineer and very tuff to ensure satisfactory result.

The saddest part went to a cadet. He was a marine engineering student from Hong Kong undergoing vocational training on board. He was severely burnt, said to be 90%. He was evacuated back to Hong Kong for treatment. He died six months later. A young life lost in a very painful manner. Burn injury is very painful due to the sheer large area, is prone to infection in particular in a non-designated burn clinic. Hospital is in fact the place for germs to grow and to infect. Survival rate of burn injury in a general hospital was statistically low.

Yet, a painful long six months the cadet and his family suffered. Watching the loved one to endure the enormous pain everyday edging towards death could not be described by any word. How many sleepless nights his parents had gone through? Too many!

I am not here to comment why the cadet was on board towards a “war zone”.

Shortly after the tragic incident, I was assigned a job on a VLCC going to load oil cargo by the west side of the PG, Ras Tanura and Das Island. Even not going to the “war zone” my company offered me, as a gesture, not to join the ship if I did not want to. No hard treatment! Was that so simple!

The ship was previously operated by Hong Kong crew. Due to the tragic incident, all the Hong Kong crew refused to go into the PG. Anyway, I joined the ship with crew from the UK, South Korea and a few Hong Kongers (including myself).

We flew to a port named Khor Fakkan south to the Strait of Hormuz, officially not yet entered into PG. We came out of the shore by launch to meet the ship at sea. The ship was still moving, but slowly, that we climbed up the gangway. I shook hand with the person I was relieving and off he went. We called this gangway handover. It was all mines after the handover.

The ship took a cautious approach to sail to the destination ports. The ship anchored at some safe places during the day. The ship sailed at full speed in the night time to the next safe place for anchoring in the day.  While sailing, all the windows were blacked not to let the living quarter light attracting attention. The route was thus not the direct route that we spent days and nights.

On the final approach, I was alone (to minimise casualty in case of an attack) in the engine room keeping watch of the machinery. With the main propulsion engine running at full power, all of a sudden, the engine room vibrated vigorously. I kept telling myself it was not an attack. The telephone rang. The chief engineer was at the other end telling me that the chief officer, in an attempt to reduce cargo loading time, had deballasted the ship too much that the propeller was partially out of the water. What a relief that it was the reason of the vibration. The chief engineer instructed to fill water into the aft peak ballast tank to bring the propeller submerged.

I was lucky to be alive to receive a few hundred dollars of bonus after leaving PG. I joined the ship was certainly not because of the bonus. There were other reasons ranging from career development to catching up with time.

I could understand the cadet joining the ship that had eventually taken his life. Nevertheless, it was generally believed that the voyage was safe before the tragic incident.

Whenever I recall my sealife, I would remember the cadet though I had never met him.

In fact, there were teams of seafarers staying in the PG waiting for casual jobs to take ships into the war zone and back while the original crew refused. They just operated the ships for a few days but paid a lot. Yet, the pay could hardly match the cargo value.

That is life. That is the cruelty of reality. Is there a choice?