Hi, this is Tat Yeung. I was a seafarer (seagoing marine engineer to be exact), a ship inspector and now a retired, not yet retarded, old man.

As a seafarer, I have some life experience that may be interesting. Say, many of you find sunrise/sunset romantic. Take your partner. Wake up early to snatch a good position to see the sun rising from the horizon. At the moment a bright yellow line appears at the far horizon followed by a reddish pit of the sun will make you jump for joy. Well, it is the seafarer’s daily scene, just another daybreak. Yet, the ship is still at sea, lonely.

This time, I would like to share some life at sea which may not be very pleasant.

You finished toilet, pressed the button. The stuff will be taken care of by someone. Who cares?

In the long past, a ship did the same thing. Pressed the button and the stuff was flushed to the sea. Not anymore. There are now international rules governing the disposal of sewage in order to control pollution. Sewage containing human waste can still be discharged to sea without treatment under strict conditions. Or, the sewage was treated by approved equipment that the conditions to discharge are relaxed.

One commonly employed method is to use encouraged bacterial decomposition. Further divided into anaerobic and aerobic.

Anaerobic is not popular because of the very strong, disgusting smell and potential dangerous gas evolved during the process.

Aerobic does not have similar drawback and widely used on board ships. Raw sewage is first collected in a tank where air is continuously blown into the content to provide oxygen to maintain bacteria alive and to agitate the content for a homogenous mix. The sewage stays in the tank for a few days while the bacteria consume the “nutrients” as food. Newcomers to the tank make the tank level rises gradually until the treated sewage overflow to another compartment. When the final compartment has reached a prescribed level, a pump will automatically discharge the treated content to sea until the level had come down to a pre-determined level.

At steady state, approved equipment is able to treat sewage, up to the designed number of persons, to an acceptable/sustainable level for disposal without causing harm to the sea environment. 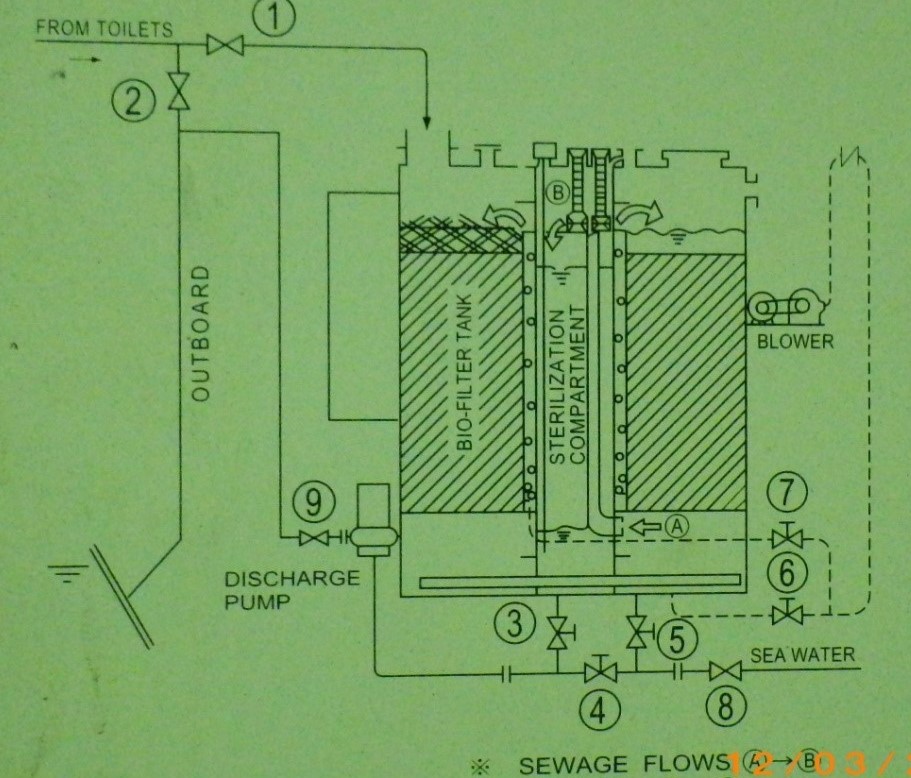 Above is a schematic diagram of a typical sewage treatment plant (STP) used on board cargo ships. It is relatively simple and easy to operate. Note the path (2) is a by-pass to let untreated sewage to go directly overboard in case of emergency, for instance, disease on board.

The diagram explains the principle. As usual, there are different types of design based on the same principle. However, every such equipment used on board must be approved to be legitimate.

Note sewage from toilet will go through a strainer first to remove solid non-decomposable material such as plastics, cigarette butts. Bacteria cannot digest these stuff.

Personal experience – when I was a trainee engineer, the lowest rank, on board. One day, the ship’s STP was found not working. The Chief Engineer wanted someone to get into the dirty STP to investigate and to rectify. You could imagine who got into it. Not a pleasant job but someone had to do it. I found the pump strainer was choked with cigarette butts. After the job, I gave a dire warning to the crewmembers not to dispose stuff other than human waste and supplied toilet paper.

Next time before you flush, think about what would happen downstream. There is a reason of not disposing certain stuff.

Below was found in the main sewer in Sydney. The stuff clearly choked the sewer. Be considerate. 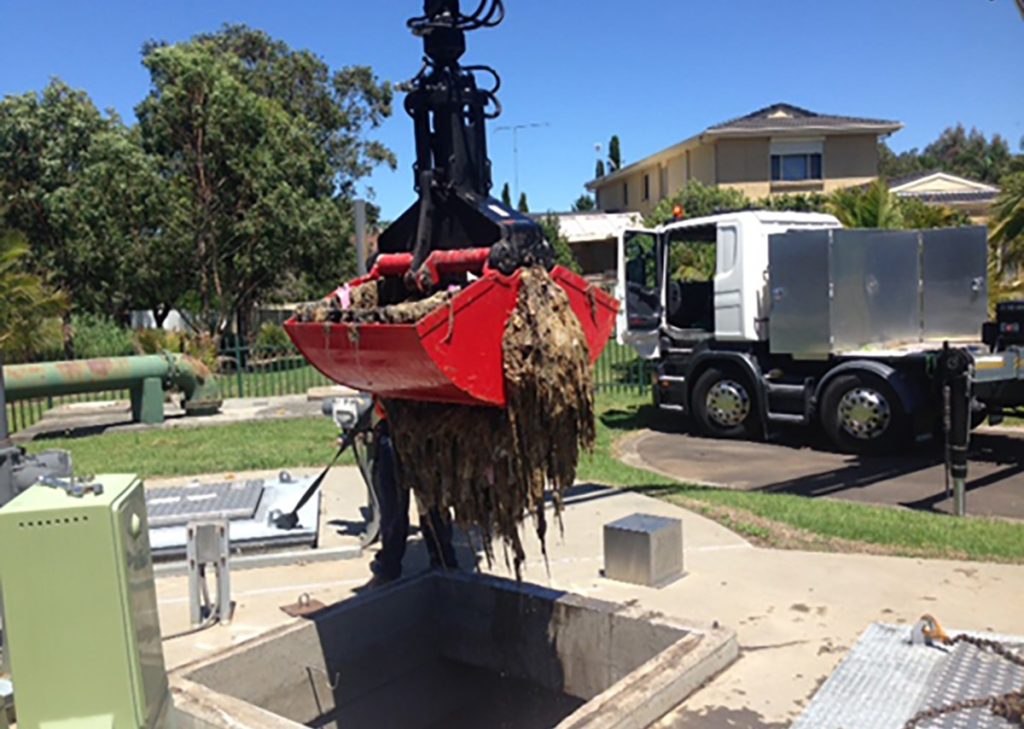 As a ship inspector, I carried out inspection of such equipment on ships in order to ensure compliance to the international pollution control regulation.

The first sign of problem was probably smell. To confirm, a manhole was opened to view inside. 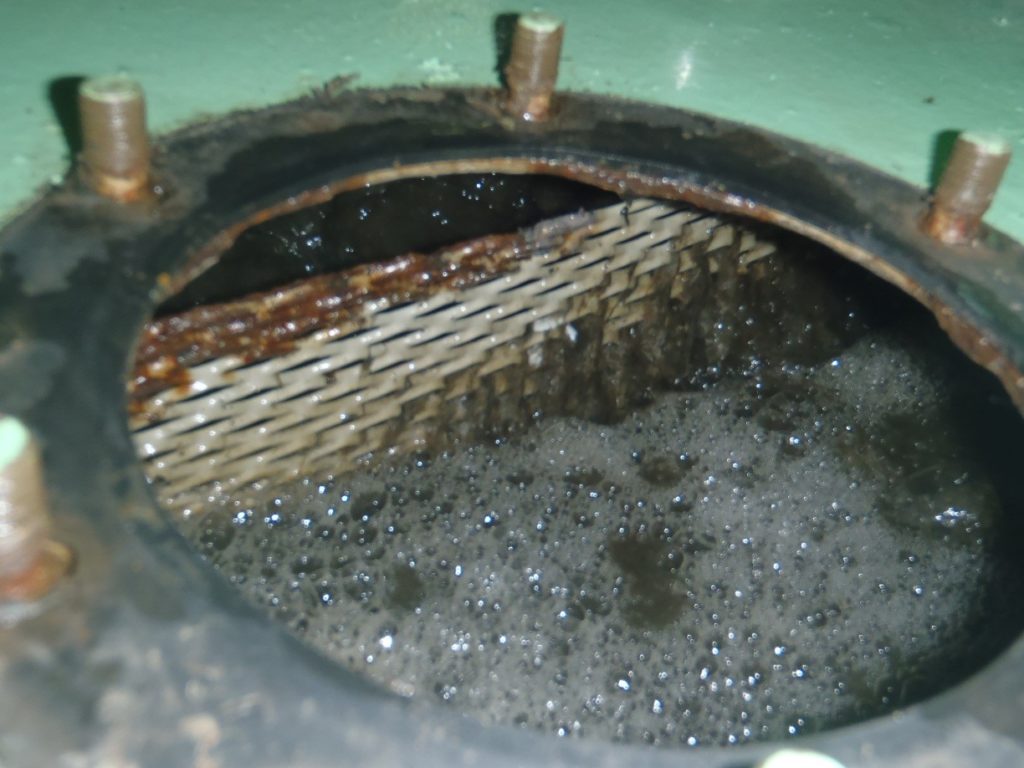 Above is a picture of a working STP as viewed from the manhole.

Below is obviously the opposite. 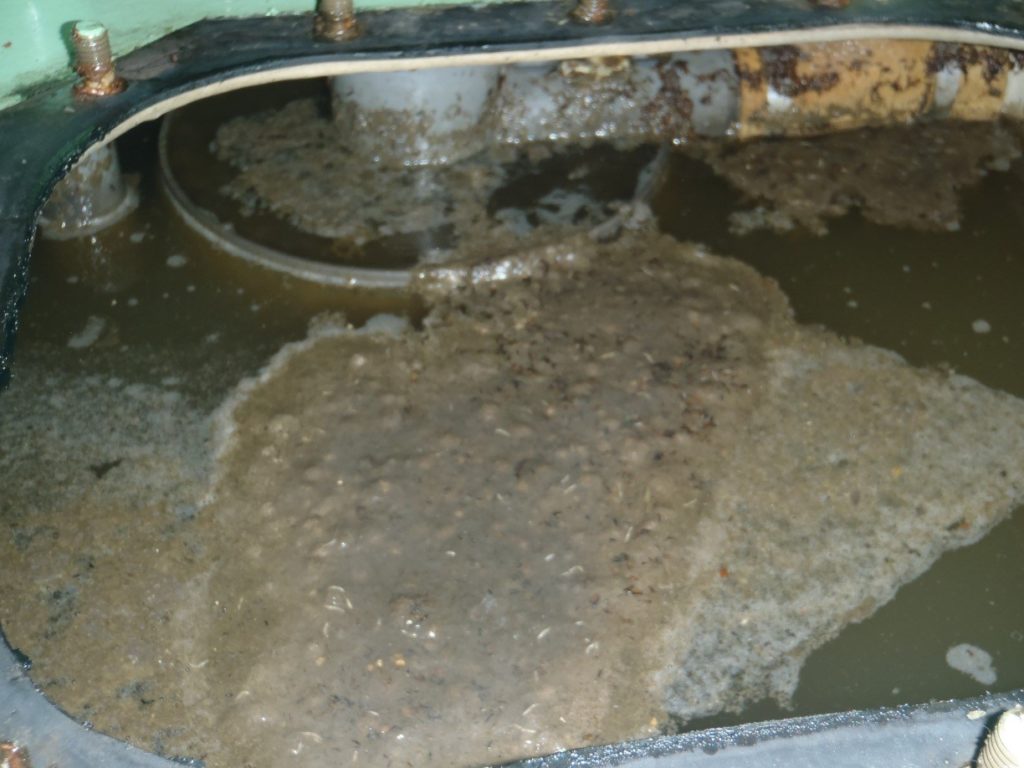 This type of STP is suitable for relatively small population, say 20 to 30 persons mainly due to the relatively long time to decompose.

On board ships with a large number of persons, say a passenger ship carrying hundreds of people, different design is used, such as comminution plus disinfecting to dispose. At port, the sewage was collected to send to shore disposal facility.

Well, this is one aspect of the shipping industry being regulated by international law to prevent and/or control pollution of the marine environment.